The practice of medicine has undergone a transformation with the advent of managed care healthcare delivery. Physicians need to be cognizant of the coding and billing requirements set forth by third party insurers for services rendered to ensure that their documentation satisfies the level of services provided. Managed Care organizations have recouped millions of dollars in refunds from providers who are unable to justify the level of services provided. The information contained in this article will provide a general overview of HMO allegations of over-utilization and the resultant insurance company audits and demands for repayment that can occur.

I. Background
What physicians should realize is that a health insurer’s fundamental existence and financial success require detailed analyses of each provider’s practice patterns using information management systems that cost millions of dollars. Insurance companies make huge financial and personnel commitments to information technology over-utilization of medical services. As a result, carriers have extensive data banks that provide the frequency with which each participating physician bills a particular CPT code and how that compares on a percentage basis with CPT codes billed by providers serving a similar patient population.1 The third party payors generate practice profiles by gathering data indicating how often a physician performs specific procedures (e.g., colonoscopy), where (s)he performs those procedures (e.g., in or out of a hospital setting), and what CPT code the physician assigns to that procedure. All the while, insurers are comparing each physician’s practice profile to other providers. Additionally, insurers maintain data banks that compare how often a provider orders laboratory tests and which tests they order and, similarly, generate provider profiles based on this information.

Once the insurer determines that a physician or a group of physicians has billing/coding patterns that deviate from a calculated norm, the insurer will, in all likelihood, commence an expanded investigation. Unfortunately, physicians usually are unaware that their billing patterns deviate from such a norm until the insurer initiates an expanded investigation. Although New York Public Health Law mandates that insurers supply the provider with the profiling data gathered in regard to that physician under PHL 4406-d(4), in our experience insurers do not always comply with this statute. As a result, physicians have little opportunity to amend their coding and billing practices and often are completely surprised when learning they are the subject of an insurance audit.

II. The Insurance Audit Process
Physicians targeted by an insurance company will normally learn of an audit by letter requesting medical records. Participating physicians in an insurer’s network agree by contract to carrier audits pursuant to their provider agreement. If a physician is not in-network provider, an audit request by the insurer can still be made. However, Federal and State confidentiality laws must be satisfied prior to disclosure.

Both Federal Law (HIPAA) and the New York State Public Health Law contain stringent requirements as to the written authorization required from the patient or authorized person prior to the release of patient information. Violation of these stringent requirements could possibly expose the practitioner to civil, or in extreme cases, criminal liability (see Art. 27-F of the Public Health Law related to release of HIV records). The managed care company must provide the appropriate authorization before medical information can be released. Be forewarned that HMO’s may suggest that they are entitled to the patient information without providing the correct interpretation of the confidentiality law.

It is also important for the physician to be aware of New York State Public Health Law Section 4406-d(4), which is applicable to any managed care company initiative in which a provider’s performance, including billing and utilization patterns, is evaluated. This law provides certain procedural safeguards to providers and imposes obligations on HMO’s who are conducting an audit. It also requires a managed care plan to share information with providers and to afford the provider an opportunity to engage in a dialogue with the plan regarding their
performance.

The importance of a physician being aware of all his/her rights and the possible repercussions of an audit cannot be emphasized enough.

III. The Refund Request Without Explanation
In certain instances, physicians may receive notification of a refund request from the insurer in which the insurer fails to specify any reason that justifies the request. In such situations, physicians should demand that the insurer provide, in writing, a specific accounting that includes the names of the patients selected and the services that constitute the basis for the audit or refund request. This accounting should be provided to the physician before beginning any evaluation or settlement discussions with the carrier.

IV. Extrapolation
Most insurer’s refund demands are usually calculated using the technique known as “extrapolation.” Typically, a sample of between five (5) to twenty (20) charts is requested. If the submitted medical records fail to substantiate the services coded and billed, as interpreted by the HMO, the insurer recalculates the physician reimbursement downward – thereby establishing the insurer’s grounds for repayment. The insurer relies on extrapolation methodology to arrive at a final figure for the repayment demand sent to the physician based on a sampling of the physician’s representative charts for that particular code. Often times the coding analysis is conducted by an independent organization retained by the HMO who are coding “experts.”

Extrapolation enables the insurer to apply its findings from a limited population to the entire universe of patients covered by that insurer and seen by the particular physician over an extended period of time – often, a six year period.2 As a result, the insurer arrives at a repayment demand that is much greater than the amount initially calculated from the submitted medical records. The physician should be aware that the use of extrapolation is rapidly falling out of favor as demonstrated by a recent decision by Medicare to lessen reliance on extrapolation for the determination of overpayments.

V. Resources for the Physician
As noted above, Physicians are well advised not to immediately accede to the insurer’s repayment demand nor enter into negotiations alone. After receiving a letter indicating you are the subject of a medical audit, it is best to contact either your medical society or a healthcare attorney well versed in matters involving insurance company repayment demands. As already noted, there are substantial issues regarding patient confidentiality when an insurer requests medical records. Breaching such confidentiality could result in substantial civil penalties. In any event challenges to extrapolation methodology include (but are not limited to) the argument that samples are not representative of the overall practice and are not statistically valid.

While litigation or arbitration is expensive and not a preferred method of resolution, at times it is necessary for the dispute to go to arbitration or court to either put more pressure on the managed care company to settle appropriately or for the physician to obtain vindication.

VII. CONCLUSION
It is crucial for the physician to be aware of the fact that any audit by a managed care company is fraught with pitfalls and can have serious repercussions not only in relation to his status with the managed care company but concerning the physician’s medical license, possible civil liability exposure and/or breach of confidentiality. For this reason any inquiry by an insurance company should be treated seriously.

I. It should be noted that providers have been compared to dissimilar providers and specializations which can skew the results of carriers’ review and dramatically affect the analysis to the detriment of a client.
2. A breach of contract action has a statute of limitations of six years by extrapolating over the minimum 6 year period the HMO can increase its refund demand.

Our Authors:
Scott Einiger, Esq. is special counsel to the New York County Medical Society, and general counsel to the American Academy of Psychoanalysis and manic Psychiatry and has been a health care advocate for over 15 years.
Ralph A. Erbaio, Jr, Esq., was an Administrative Law Judge with the Department of Health and the Office of Professional Medical Conduct specializing in the area of Physician Discipline, reimbursement and Fraud issues. 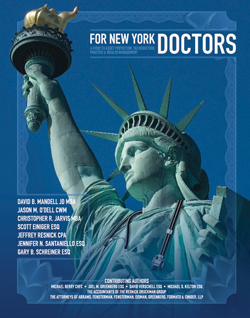